Years ago two actors met while doing a play together in London’s West End. As most people know, actors tend to wait tables, bartend, manage or all of the above when they’re not …acting. Such was the case for Helen Wassell-Paez & Alex Paez.

When not onstage, Helen managed a few Italian spots in London’s trendy Muswell Hill. She also worked as a wine rep for Belloni Wine Merchants when she wasn’t singing with a band… IN GREEK!

Alex got his first taste of serving at The Library, a funky little bistro serving continental cuisine (where you could actually borrow books!) on Manhattan’s Upper West Side sometime around 1980.

A few years after relocating to Los Angeles (from New York) and managing at various spots in and around town, they made a decision, at this stage in life, if the service industry (between acting jobs) was to be their livelihood, “better to own the tables you’re waiting on”. And so in 2004 Helen and Alex set out to open their own little place in the NOHO Arts District”of North Hollywood, CA. As it turned out, this was not to be...

Marin Santos worked with Helen as Executive Chef at one of Hollywood’s most prestigious hot spots. Let’s just say that if you had a job at this place, the best way to describe it would be “Sweet!” Give it a minute, it’ll come to you. In 1991 he began working at Primi (owned by Valentino) and eventually wound up preparing everything from salads & desserts to pastas & appetizers at Posto between 1992 and 1999, ultimately becoming executive chef at Valentino & Dolce all before the age of 30. It was at Dolce where Helen and Alex met Marin. When Helen mentioned what she and Alex had in mind, the collective wheels started turning…

It would be 4 months before the perfect location was found and another 18 months (a year behind schedule) before they were anywhere near opening their doors. When that time came, they had a much better understanding of the old adage that 'rarely anything in life that's worth doing is easy'. 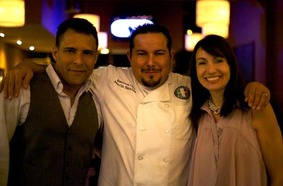 Helen Wassell-Paez, Alex Paez and Marin Santos. Three individuals who understand what good food and good service are all about. Five years ago, they did it in Venice, now they've brought it to Burbank. And that’s…"la cosa di Centanni.”